Adam Fitzpatrick has been paying his tribute to Elvis Presley since 2008 when he entered his first Elvis competition in his home town of Penticton at the Pacific Northwest Elvis Festival.  Adam was an Elvis fan for about 4 years before he was dared by a friend to join the competition as he spectated and cheered on friend Joe Kelso who became a mentor to Adam as he began his Elvis Career. Adam went on to win the Amateur Title that first competition he joined in 2008 in his Hometown. As the next few years went on Adam worked on his tribute to Elvis and was rewarded his first professional title in 2012 in Pala, California. Adam went on to win Several Professional competitions including the 2013 Penticton Pacific Northwest Elvis Fest, 2014 Europe's Tribute to Elvis, 2014 Las Vegas Elvis Festival as well as Las Vegas Festivals Peoples Choice Award. Adam's Greatest achievement is placing First Runner Up in the World's Ultimate Elvis Competition in Memphis, TN in which the winners from all the competitions that year join to compete for the Ultimate Elvis Title. Adam now lives in Calgary, AB with his Beautiful Wife Faryn and their 3 Children Aiden, Presleigh and Noah. Adam's main focus is and always will be his family but looks forward to when the time is right to be able to compete again. Adam loves and appreciates all the support his fans give him on and off stage and looks forward to keeping the memory of Elvis alive for years to come. 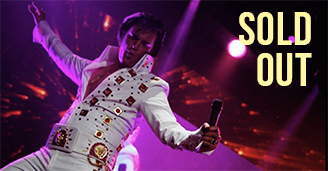