Close Alert Banner
Close Old Browser Notification
Browser Compatibility Notification
It appears you are trying to access this site using an outdated browser. As a result, parts of the site may not function properly for you. We recommend updating your browser to its most recent version at your earliest convenience.
Skip to Content
Lake Country Home
Search

Add to My Calendar

Price: FREE (can still book in advance online, over the phone, and in person through Kelowna Tickets)

Pianist Luke Welch was born in Toronto and grew up in the nearby city of Mississauga, Canada. He played his first public performance at age seven, and his first private piano teachers include Kyzysztof Jedrysik and Catherine Kuzeljevich. He later completed Bachelor and Master of Music degrees at the Western University in Canada under the tutelage of John-Paul Bracey and accomplished further graduate studies in the Netherlands.

Other highlight performances include recitals at St. Giles' Cathedral in Edinburgh, St. Martin-in-the-Fields in London, Castletown House in Ireland, St. Andrew's-on-the- Terrace in Wellington (New Zealand), Music Mondays at Holy Trinity in Toronto, Southminster United Church and Trinity Anglican Church in Ottawa, FCAP in Amsterdam, Waalse Kerk in Breda (Netherlands), and Beethoven Haus in Bonn, Germany. He made his concerto debut with the Durham Chamber Orchestra under the baton of conductor John Kraus, and has since performed with a number of orchestras including Greenway Strings, Mumbles Symphony Orchestra, and Winchmore String Orchestra.

Welch's highly-anticipated second album Crossing Borders was released in 2017 to critical acclaim and is regularly broadcast on KING FM 98.1 Seattle and Radio Classique CJPX-FM. This year, he was named the 2018 recipient of the Harry Jerome Arts Award - distinguished with national recognition by the Black Business and Professional Association. His third album, entitled The Return, was released in February, 2019. 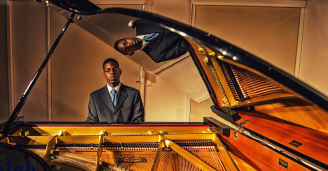